Proponents of the proposed Uinta Basin Railway oil train claim it would allow the oil industry to quadruple petroleum extraction in the area. Residents are concerned their property will be seized by eminent domain in order to serve private industry rather than the common good. Many have been notified that surveys are already planned.

The oil train would exacerbate climate change, degrade air and water quality, and damage public and private lands. It would permanently endanger the communities along its path. From methane releases at the extraction sites in Utah, to the fuels burned to transport it, to pollution at refining sites (likely in the Gulf of Mexico) and where it is burned, to the ultimate climate impacts, this oil train is a reckless misuse of public money.

Send your comments and sign the petition here: https://www.stopuintabasinrailway.com/

The Surface Transportation Board, the lead agency working to permit the oil train, has released their scope of work document - December 9, 2019
Scope of Work for Draft Environmental Impact Statement

The Draft Environmental Impact Statement (DEIS) has been published and the deadline to comment is fast approaching!

These organizations are working to stop the proposed oil train. Write and ask how you can help their efforts. 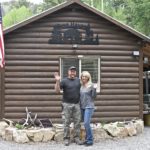 Roger and Melissa Peck want to welcome the proponents of the oil train to their property, so they can see the place that may be seized and destroyed. 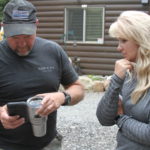 Roger and Melissa Peck await news about the arrival of oil train surveyors. 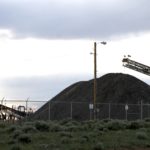 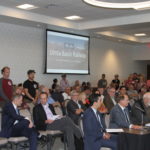 Meeting in Vernal, Utah, where $21.4 million of public funds was allocated to a new oil train. 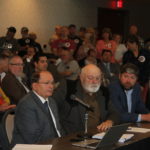 Proponents of the oil train spent hours promoting the project to the Utah Permanent Community Impact Board. Those opposed (standing in back) did not get to speak. 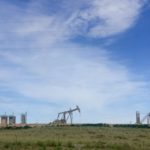 One of thousands of oil derricks in the Uinta Basin.